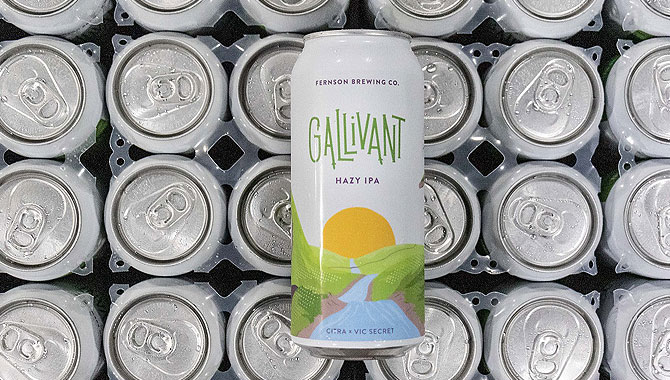 The brewery offers five core beers of which the range includes a hoptastic IPA ‘Shy Giant’, ‘Lions Paw’ an easy drinking lager and even ‘Curio’ a citrusy tart brew; these core beers stay on year-round alongside one-off specials, collaborations and season guests.

As well as being available on-site, a range of Fernson beers are available in cans and play a key part in the Brewery’s offer, allowing drinkers to enjoy Fernson’s beers at home.

“We are often asked why we chose cans for our beers rather than bottles and there are two basic reasons. One is that cans are better at protecting each beer from light and oxygen and two is because aluminum cans are lighter and easier to recycle than glass,” says Joel Thompson, CEO of Fernson Brewing Co.

“However, whilst cans are great for the beers and our drinkers, the packaging of them was proving to be very labor intensive, and many of the automated solutions we had seen were just too expensive for the level we need to run our machines at.”

Yet WaveGrip’s G1 applicator proved to change that for Fernson. With its low entry price, automating the packaging process became a reality and the G1 delivered savings in both the cost of labor and materials needed to pack its cans.

Whilst the G1 applicator provides efficiency upgrades for the brewery, the WaveGrip Carriers are also providing sustainability benefits as well. Weighing less than 4g for a standard six-pack and using less material than any other multi-packing solution, WaveGrip is the lightest carrier on the market. Additionally, all WaveGrip carriers are 100% recyclable and meet current US Packaging regulations by being photodegradable.

WaveGrip Managing Director, Aaron McIvor, comments: “We wanted the G1 to be an accessible solution for craft brewers, giving them an entryway into automated multi-packing of cans and allowing them to increase their production at an affordable cost. We are delighted to see that Fernson are already benefitting from reductions in labor and material to pack their beers and look forward to these growing as their production scales up.”

“The WaveGrip G1 was the perfect choice for us and even running at just 30cpm we are seeing significant benefits, including giving the team more time to spend on what they love – the brewing!” concludes Joel.