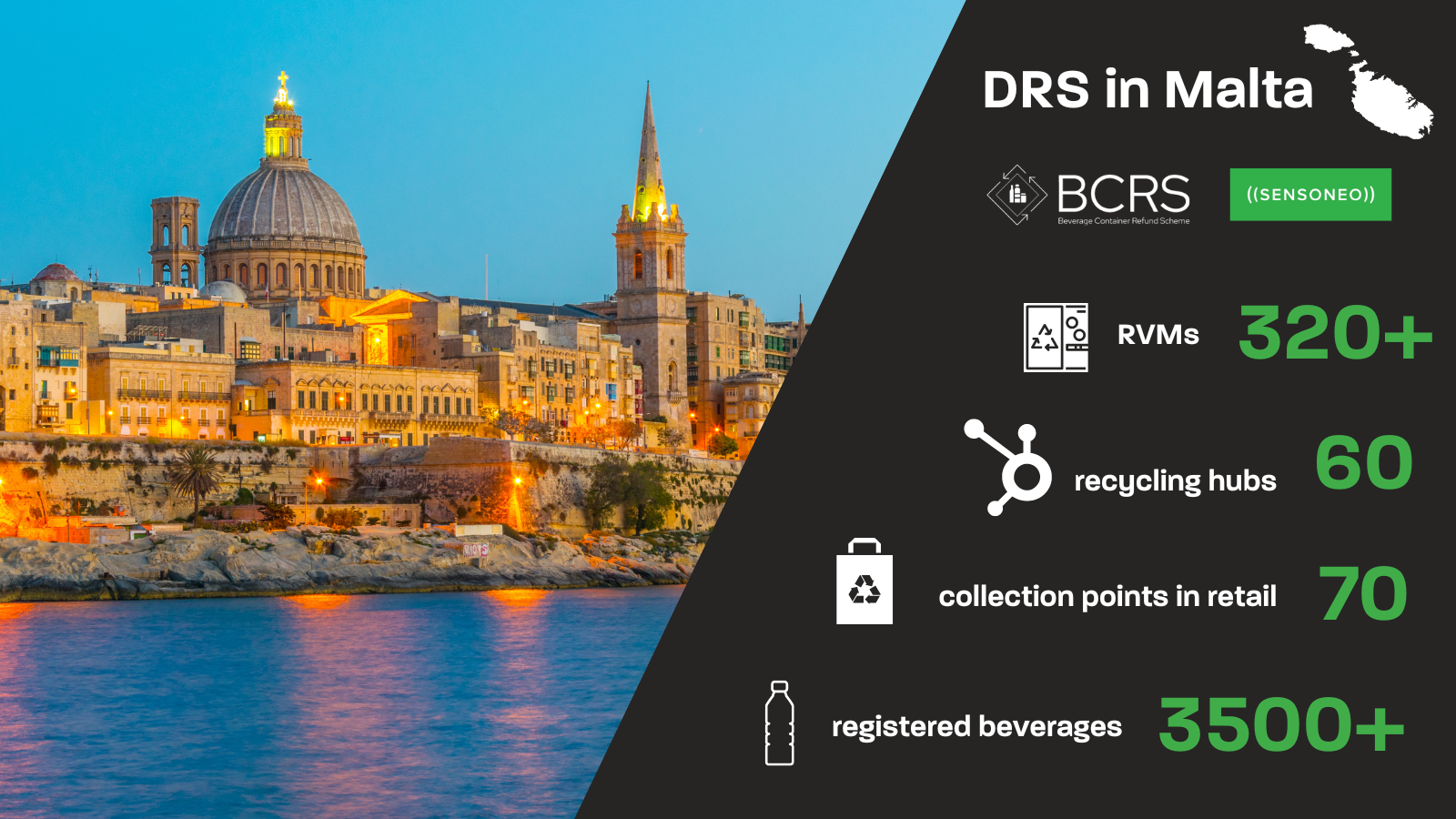 Malta follows the other 12 EU countries that have introduced DRS as a tool to significantly reduce littering and increase the collection and recycling rates of single-use beverage containers. The deposit return scheme in Malta is operated by BCRS Malta Ltd., the licensed, not-for-profit private operator of the national Beverage Container Refund Scheme. The organization was incorporated by associations of beverage container producers, importers, and retailers to assume collective extended producer responsibility on their behalf. Sensoneo’s DRS system works as the backbone of the entire system, as it integrates all stakeholders and gathers data from all sources within the process chain.

Bringing the DRS to Malta has been considerably influenced by the strong tourism industry in the country. Although the population of the island country is only about 517 000, in summer tourists often outnumber locals. This reason, among others, led Malta to involve the hotel, restaurant, and catering industry (HoReCa) and also to implement public recycling hubs.

There are three ways the beverage containers can be returned and refunded:

Over half of the 320 reverse vending machines (RVMs) are placed in shops and supermarkets. Vouchers that are issued in a particular shop or supermarket can only be redeemed there, which is a system known to most countries that have implemented DRS.

In order to balance the market between large supermarkets having RVMs and small retail shops without an RVM on site, a similar number of RVMs are also placed in public “recycling hubs” for people that do not necessarily want to return empty containers to a supermarket. Malta is divided into about 65 localities, and there is a public recycling hub with RVMs in almost every one of them. The vouchers that are issued from these hubs can be redeemed at any registered retail outlet selling beverages across the whole country.

The role of HoReCa in DRS

All economic operators in Malta are legally obliged to participate in the scheme. Because of the nature of the country, the biggest number of economic operators are not retailers, producers, and distributors, but rather the hotel, restaurant, and catering industries.

HoReCa economic operators are not obliged to collect beverage containers from people in the same way that retailers are: when on-premises consumption occurs, the establishment’s responsibility is to return the can or bottle to the operator in order to claim the deposit back. In the case of takeaway service, a deposit is charged, and this responsibility lies with the customer.

When it comes to accommodation providers, hotels with a throughput in excess of 500,000 containers a year have their own RVM in place to make the logistics chain more efficient.

Learning new ways of recycling together is a message accompanying the launch of DRS in Malta. Currently, the country recycles less than 20 % of single-use beverage containers, and the goal is to reach 90 % by 2026.