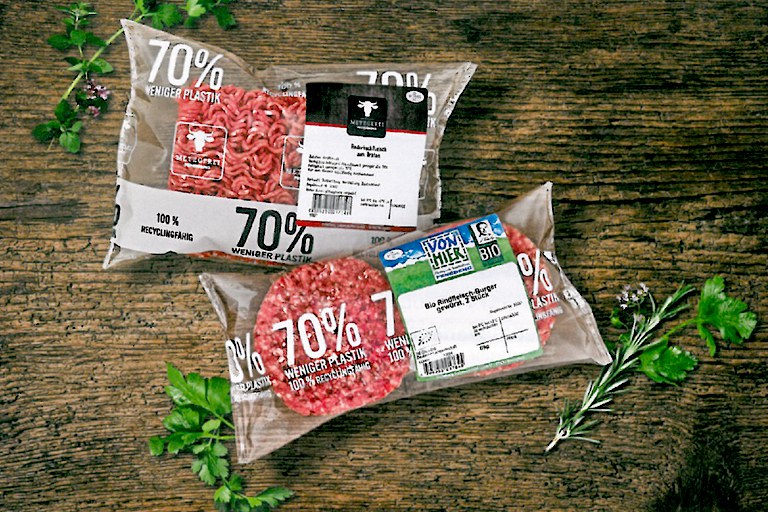 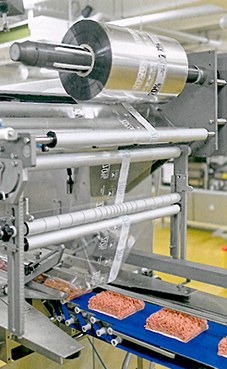 As the first German food retailer ever, Feneberg has completely changed its production and no longer offers its self-service minced meat products in the almost 80 branches in the previously standard MAP tray, but exclusively in the sustainable flow-pack. The Allgäu pioneer developed and implemented the new packaging idea together with ULMA Packaging GmbH, based in Memmingen.

"As a regionally rooted family business, Feneberg stands for values such as homeland, quality and trust. The regional production of food and the connection with the region and the people who live there, have always played a central role at Feneberg. Regional production, close partnerships with farmers, animal welfare and environmental protection have been the key points that characterise the production of our meat and sausage products for many years. With this in mind, it was important for us to also evolve in the packaging of our high-quality products and choose an alternative that continues the sustainability criteria in production," says Hannes Feneberg, who together with his brother Christof is the third-generation Managing Director of Feneberg Lebensmittel GmbH.

Switching to flow pack packaging was an important step for the company, because every week the Feneberg butchery in Kempten produces a total of 20 tonnes of minced meat and minced meat products such as burger patties. The most important thing for Feneberg: customers go along with the sustainable path. "The new packaging is very well received. We have obviously hit the nerve of our customers, who want more sustainability in their shopping," Hannes Feneberg sums up positively.

The big advantage of the flow pack wrapping: with a package of 60-65 µ, it is up to 10 times thinner than conventional MAP trays, which are usually 450-650 µ thick. In addition, the flow pack package is significantly lighter than the tray: instead of weights of 13.58 g to 24.98 g for tray packaging, the flow pack solution weighs just between 4.00 g and 4.94 g, depending on the size. As a result, Feneberg saves at least 70 per cent plastic per packaging unit, at production peak times even more than 80 per cent. Calculated over the year, that's 35.7 tonnes less plastic that Feneberg puts into circulation.

Another sustainability plus for the flow packs: they are made of the multi-layer film, from the mono-material polypropylene (PP), and are therefore completely recyclable. The flow pack packages make it particularly easy for the final consumer to recycle: open the packaging, take out the meat and the film can be placed unwashed in the yellow bag and thus fed into the recycling process. "This simple handling without further separation convinced us," explains Christian Gareiß, Head of Production Technology at Feneberg. "Many other packaging concepts that save plastic require an intermediate step from the final consumer. Often, as an example, you have to pull a film off the carton, which from experience, is not always done.

The packaging then ends up in the residual waste. That is the end of the line for recycling before it has even begun," Gareiß continues.

Less plastic does not mean less quality and hygiene - on the contrary. "The flow pack replaces 1:1 the technical properties of the MAP tray," explains Thomas Blümel, Managing Director of ULMA Packaging GmbH. The multilayer film made of mono-material consists of more than 95 per cent polypropylene (PP) as well as a thin high-barrier and thus keeps the minced meat products fresh and appetising at the highest level. Thanks to its protective atmosphere, the flow pack is also easily stackable without damaging the minced meat.