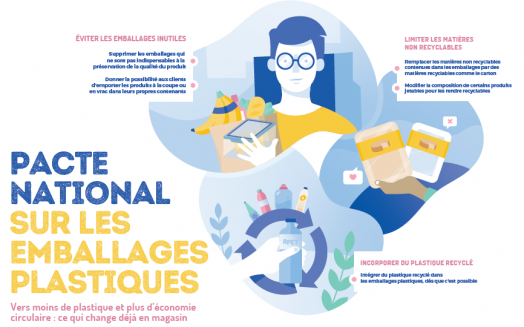 This morning, Carrefour formalised its commitment to reducing plastic pollution at the Ministry for the Ecological Transition, by signing the national pact for phasing out plastic packaging by 2025. With a partnership and co-development ethos and a concrete action plan designed to help citizen-consumers and create a more sustainable future, this pact has also been signed by Auchan Retail France, Biscuits Bouvard, Carrefour, Coca-Cola European Partners, Danone, L´Oréal, LSDH, Nestlé France, Système-U, Unilever, the Tara Foundation and WWF France.

Back in May 2018, Carrefour undertook to reduce its use of plastic to the bare minimum. It also committed to ensuring that all of the packaging used in its products could be recycled or composted by 2025. A voluntary and ambitious commitment that Carrefour now wants to share with the government and the other founding signatories of this collective pact. Carrefour is now calling upon all major companies in the retail sector as well as NGOs and consumers to get behind it and commit to a number of shared targets to combat plastic pollution.

Every year throughout the world, between 8 and 12 million tonnes of plastics get into our oceans. In France, packaging accounts for 45% of the total amount of plastic used and only 25% of household plastic packaging is effectively recycled. One of the things Carrefour is doing in signing this national pact is boosting its eco-design efforts and its implementation of innovative and sustainable solutions.

The commitment is in line with the Group’s stated aim of becoming the world leader in the food transition with its Act For Food programme, which is already taking shape via a whole set of concrete solutions. Having removed plastic straws from its shelves, Carrefour is going to be stepping up its solutions over the next few weeks for reducing plastic pollution.

In 2019, the traditional polystyrene trays are going to be replaced by cardboard trays in the cheese section. A radical change that will save 111 tonnes of plastic this year. In 2019, organic fair-trade bananas (15,800 tonnes of which were sold in 2017) will no longer be packaged in plastic sachets, saving at least 23 tonnes of plastic every year. The bananas will still be identifiable via elastic bands around them and will be on sale in all stores throughout France, gradually rolled out between March and September. Eventually, these bands will be made of paper.