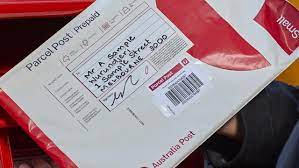 Australia Post has unveiled new parcel packaging that includes a dedicated space for the inclusion of traditional Aboriginal place names.

The move is part of NAIDOC Week 2021, which runs from July 4 to 11, and its theme “Heal Country!” and is for customers who wish to recognise traditional country on their mail.

The organisation is also celebrating the First Nations culture by wrapping street postal boxes in indigenous artwork with a design created by Darwin’s Marcus Lee of the Karajarri people.

“We not only listened to Rachael but to the overwhelming feedback from thousands of Australians who supported this fantastic concept to recognise traditional country on their mail,” Mr Heelan said.

“Including the traditional place name as part of the mailing address is a simple but meaningful way to promote and celebrate our indigenous communities, which is something Australia Post has a long and proud history of doing.”

Ms McPhail said she was delighted to see Australia Post build on her idea and encouraged Australians to expand their knowledge of indigenous heritage and start including traditional place names when sending letters and parcels.

“This is about paying respect to First Nations people and their continuing connection to country,” she said.

“If everyone adopts this small change, it will make a big difference.”

The newly designed parcel post and express post satchels, which also include an acknowledgment of country, have a nominated line below the recipient’s name to include a traditional place name above the street address and postcode.

Traditional place names can also be used on letters, provided they appear above the street address and postcode.

For tips on how to identify First Nations localities and sending guidelines visit auspost.com.au/traditionalplacenames.