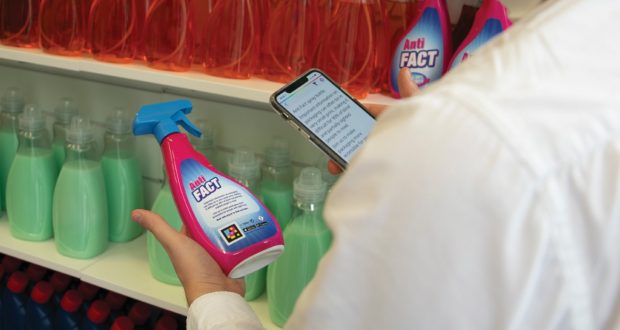 For so many of us, it’s a given that we can identify our favourite food products and read on-pack instructions. But for those who are blind and partially sighted, this information is inaccessible and it’s a problem.

“I have been registered blind since I was a young lad,” explains Marc Powell, strategic accessibility lead at the Royal National Institute for the Blind (RNIB). “I’ve accepted that packaging is not accessible.”

Despite this, the charity hasn’t stopped campaigning to make packaging and retail outlets accessible. And the signs are that progress has been made. It’s taken new technology (from NaviLens) and the support of a major brand (Kellogg’s) to kick start change. And last month, RNIB took the campaign one step further with the unveiling of a pop-up store to give people some insight into what it’s like to be blind or partially sighted.

The momentum has come at the right time. At the end of last year, RNIB research into food packaging found that nine in 10 blind or partially sighted people had difficulty reading information on packs. The charity highlighted two examples of where accessible information is critical for the visually impaired.

Laura from West Sussex has a 13-year-old daughter Jorja, who is visually impaired and who is coeliac. Laura says: “Jorja has this condition for life, so she must have a strictly gluten-free diet. She’s now at the age where we’re trying to give her some autonomy, getting those life skills to go to a shop and buy things. We either research what she thinks she might want to buy ahead of time, or I let her choose things and I check the packaging later.

“We should all be able to make an autonomous choice with all the available information. Nobody should be made more vulnerable through the lack of accessibility.”

Samantha was diagnosed with diabetic retinopathy six years ago and often struggles to find accessible nutritional information, which puts her health at risk. She adds: “Keeping my sugars under control is crucial to preventing my eye condition from getting worse. Not being able to access the nutritional information I need as a type one diabetic can be very serious.

“I will sometimes ask staff to find the information I need but this makes me feel very anxious as I can’t check if its correct. Accessible packaging would mean the freedom to choose what I want to eat and give me back another part of my independence.”

Braille is one way to communicate on-pack information to blind and partially sighted people. But the RNIB’s Powell points out that this format has drawbacks.

“The only options up until now have been braille but there are challenges from a manufacturing and user perspective,” he says. “The perception from brands was that people wanted braille. But it can create a barrier on production lines and provides limited information. You cannot communicate all the information in braille on a pack. To fit it all on, you’d need something the size of a wall.”

Technology was always going to be the answer but it took some time. RNIB’s campaign on accessibility for food products had focused on the retail space and not so much the packaging itself. It was hard as the charity was, as Powell puts it, “a small fish in a big pond”. But in 2019, Kellogg’s approached RNIB with a view to create accessible packaging for blind and partially sighted people. The charity was also aware of NaviLens, which it was working with two years prior to the link up with Kellogg’s.

“When they first showed me the technology, I couldn’t believe how good it was,” recalls Powell. “In my entire life I had never been able to navigate around a store independently; I was with one of my colleagues who was in tears – at one stage I was guiding them around.”

In a nutshell, NaviLens is similar to a QR code but can be detected in a fraction of the time and up to three metres away. A smartphone can detect the optic, and playback labelling and allergen information to the user. Changes to packaging artwork enable the technology to flourish while phones play a big part.

“Smartphones are a like a Swiss Army Knife for me,” adds Powell. “Without them I would be missing out on so much. A lot of people don’t realise that these devices have so many integrated accessibility features. It provides a bridge.”

By October 2020, Kellogg’s was ready to trial – in over 50 Co-op stores – accessible packaging on its Coco Pops brand. The trial featured boxes that not only incorporated braille, larger print and simplified artwork but with the NaviLens technology. The trial was considered a success with 97% agreeing that they would like to see more accessibility features available on grocery packaging.

Kellogg’s was so encouraged by the results that it announced that NaviLens codes would be added to its entire range of cereal products across Europe from early next year.

“The trial delivered results beyond our expectations, with the main source of its success being down to the introduction of NaviLens,” explains Pete Matthews, director of brand design and operations at Kellogg’s. “That’s why we are now proud to announce that from early 2022, our entire European portfolio of cereal products will feature NaviLens codes. We’ve been incredibly proud to go on this journey with our friends at RNIB to find a solution to make packaging accessible for everyone and hope that it inspires other brand owners to join this movement.”

Powell believes that other brands could follow suit and not just in food; packaging in other markets could make use of the application.

“The possibilities are endless,” he adds. “Household products featuring sprays could benefit – safety is incredibly important. In the pharmaceutical sector, the EU directive is around braille but is that an intuitive way to access information? Probably not as you are getting a limited amount of information.”

Powell believes that the move is a game changer and has “stirred the pot” when it comes to public awareness around accessible packaging. RNIB has sought to engage with members of the public through its Design for Everyone campaign. As part of the drive, last month the charity opened up its ‘WhatsIn Store’ event to give an insight into how it feels to be confronted with inaccessible packaging.

“We needed to convey to the general public the problem and showcase it,” he adds. “The shop is a great way to provoke a reaction, showing the level of frustration for blind and partially sighted people.”

The store, set up in central London, is stocked with products with blank or intentionally vague packaging. Hidden cameras will film people’s reactions while the shopkeeper reveals that this is the reality for people with sight loss when they are out shopping or want to buy food on-the-go.

Powell promises that more is to follow next year and the plan is also to collaborate with more brands and, ultimately, to influence government. If this year’s activity is anything to go by, then the conversation around accessible packaging is picking up momentum – and not before time.