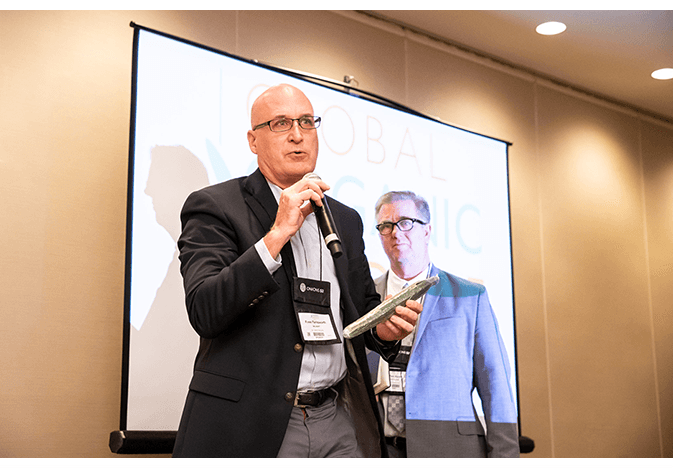 Walmart has been working with individual suppliers to reduce plastic in produce departments as consumer interest in sustainability increases.

Ross Farnsworth, senior director of the Southeast global food sourcing team for Walmart, gave two examples of that collaboration while speaking on a panel Jan. 10 at The Packer’s Global Organic Produce Expo. He called out from the panel audience Leamington, Ontario-based NatureFresh Farms and Yakima, Wash.-based Domex Superfresh Growers to talk about their work with Walmart on developing and experimenting with more sustainable packages for various produce items.

Farnsworth held up an English cucumber wrapped in plastic as an example of the difficulties of eliminating or changing packaging.

“Without the packaging, shelf life is max 72 hours,” Farnsworth said. “With the packaging, we can get almost 14 days. So this item doesn’t even exist if we don’t have some type of a packaging.”

Matt Quiring, executive retail sales account manager for Nature Fresh, said the English cucumber has been a target for the greenhouse company because Walmart has made clear that it wants to get out of single-use plastics. The companies brainstormed in recent months about possible solutions.

“The key here is you start with something and you move forward with it over the course of time, and if you get off track from the sustainability playbook, you just make sure you veer back into the right direction,” Quiring said. “That’s the key here is you just keep evolving over time, finding the right solution for the consumer.”

Quiring noted that it is unknown what the cost structure will be for the company’s more sustainable packaging for the item because it is not in the market yet.

Mike Preacher, director of marketing for Domex, mentioned that starting small with new, more sustainable packaging options is the best approach. Domex is piloting with Walmart in the New York market a four-count organic fuji consumer pack designed as an environmentally friendly alternative to traditional packaging.

“From our view and what we’re learning and working with retail partners, as Ross said, kind of in a small way get the package out there — test it,” Preacher said. “We’re actively asking consumers for feedback — do you like this package, is it working for you, what’s your perception of it — all the while tracking sales.

“To Matt’s point too earlier, we don’t know how they’re going to sell, how they should be priced, what’s going to trigger more usage,” Preacher said. “I think we all have to have a little patience out of the gate, absent the scale, to build confidence that these things will work. Don’t go invest in a half-a-million dollar machine has kind of been our biggest thing, so do it manually, right, so that we don’t have somebody on the hook for that or we don’t put ourselves out of business.”

Farnsworth noted that Walmart is uniquely positioned to bring more sustainable packaging to market once consumer interest is confirmed.

“If we can identify a potential solution, trial it quickly, scale it and move, we have the ability to move that cost structure down pretty quick,” Farnsworth said.

He added that Walmart’s interest in being more sustainable is not limited to packaging. The retailer has an index that also considers water usage, electricity usage and carbon dioxide emissions, among other factors. Buyers use those scores along with metrics around quality and service to evaluate suppliers.

“It’s part of one of the lenses now that’s determined who are we going to go do business with, so that’s encouraging suppliers to change behavior,” Farnsworth said. “It’s not just around who’s got the lowest cost anymore.”