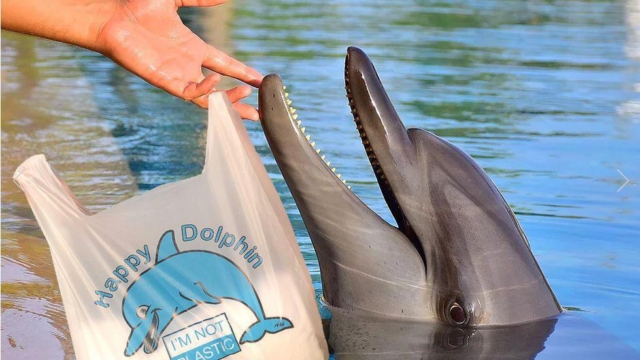 A new kind of compostable carrier bag that is made from the same material as egg shells and has a much lower carbon footprint than plastic, paper and other “biodegradable” bags has been launched in the UK.

Known as the Happy Dolphin, the bag is the result of a £4m EU commission to invent a new kind of plastic substitute to help solve the waste crisis.

Its developers are in discussions with UK supermarkets about using their bag and have signed a deal in Vietnam to supply four billion of them to Seven-11 outlets in the country.

Hundreds of millions are also in circulation in Europe.

“This is a transformational breakthrough in the war on plastic and climate change. It’s the silver bullet with the lowest CO2 emissions and no plastic pollution,” said David Hughes, of Happy Dolphin, in Wrexham.

Compostable “bio” bags have typically been made from corn starch, sugarcane or cassava and have had a mixed reception. Many can only break down at high temperatures of 55C to 70C and suitable processing facilities are in short supply.

By contrast, the Happy Dolphin bag is made from a newly-created, patented material called Biodolomer; a mixture that is 50 per cent calcium carbonate mineral – the dominant ingredient in egg and snail shells – mixed with vegetable oils and sugarcane.

The material is strong, meaning it can be used 50 times over a period of up to two years before it becomes too weak or worn to use. It is also affordable at 25p to 30p, making it comparable to existing supermarket bags-for-life which cost between 20p and 50p.

An independent study commissioned by the EU found the Happy Dolphin bag had less than half the carbon footprint of both normal plastic bags and other biobags – even lower than paper bags – over the course of its life, from manufacture of the pellets that make up the bag to its disposal.

Furthermore, the material has been tested and approved by benchmark European tests for compostability.

The bag was developed, at the request of the EU, by Ake Rosen, a Swedish materials engineer who played a key role in the development of packaging at Tetra Pak, the company known for its tetrahedron-shaped plastic-coated paper drinks cartons.

He has been experimenting with egg shells – which he calls “nature’s perfect packaging” – for years through his company, Gaia BioMaterials in Sweden.

“The egg shell is very important for our packages. We always have it sharply in focus when we develop new packaging,” he said, adding that they protect and enrich the soil as they break down.

“All the earth is covered with calcium carbonate and it takes care of the acid by neutralising it. If we didn’t have it the earth would die of acid.”

The new bio-plastic can also be used for other things:

The makers of the Happy Dolphin bag also have plans to use their new bio-based plastic material in a range of other everyday items, from cups and bottles to cutlery and beer mugs.

Dave Hughes, co-founder of Happy Dolphin, will initially turn his attention to pint glasses made out of the Biodolomer material.

“We’re going to go out to all the Premier League, Formula One, we’re looking at all horse racing, all the festivals,” he said.

But in the longer term, he hopes to branch out much further since the material is suitable for 80 per cent of all plastic uses and virtually all consumer plastic uses.

The exception being tougher industrial uses, such as construction packaging, where the materials it contains may potentially sit in a warehouse for years before being used, he says.

Campaigners welcomed the prospect of the new material coming to the UK.

“Humanity has just nine years to save the world from the plastic waste crisis before irreparable damage is done to the planet. This should drive us to reduce plastic consumption and production.

“Any new material which inspires a shift away from plastic should be embraced.”