Use the sniff test’: Morrisons to scrap ‘use-by’ dates from milk packaging 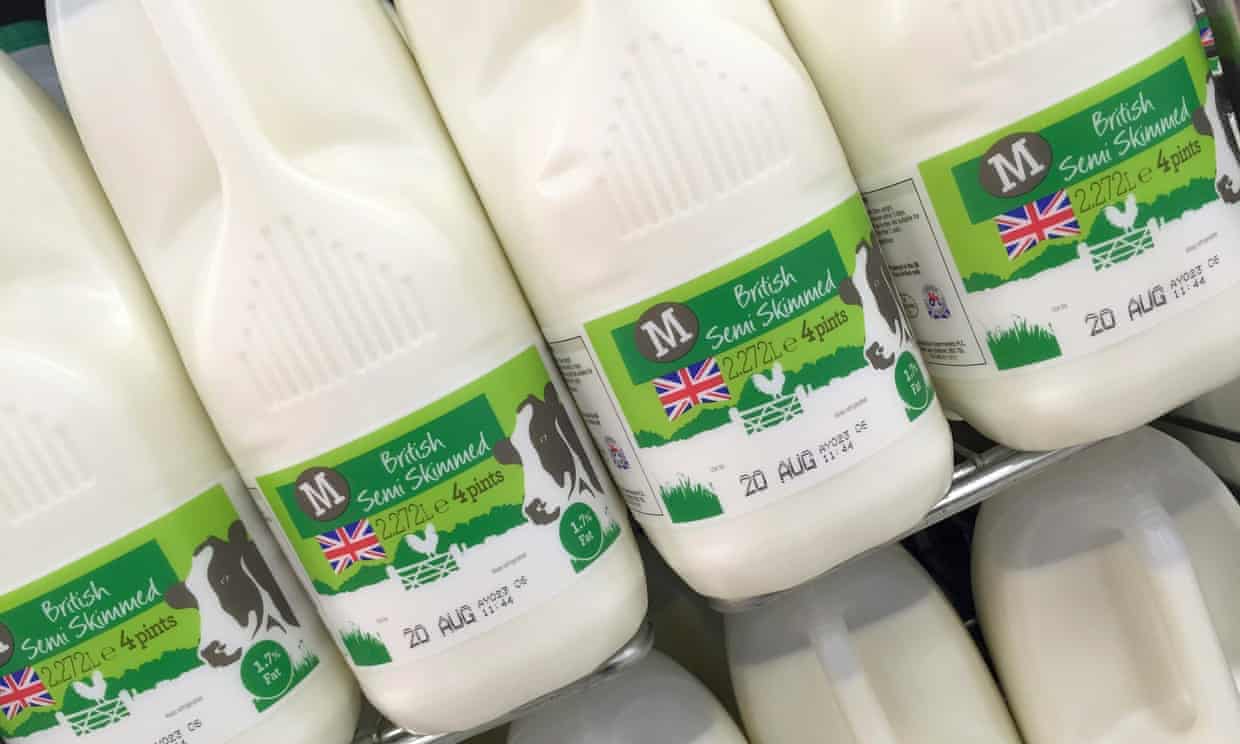 Morrisons will remove “use-by” dates from milk packaging at the end of the month in an attempt to save millions of pints from being thrown away unnecessarily every year.

The British supermarket is asking customers to use a simple and time-honoured test to work out if cow’s milk is usable: sniff it.

Bottles sold by the retailer will still carry “best before” dates that will give an indication of when the milk will have the best taste, but it can often still be used safely for several days after that point.

The UK wastes about 330,000 tonnes of milk every year, about 7% of total UK production, according to figures from 2018 from food waste charity Wrap. Most of the wasted milk – 490m pints – is thrown away in the home, making it the third most-wasted food in the UK, behind potatoes and bread.

Milk is also associated with high carbon emissions because of the large resources needed to feed cows. Increasing awareness of its carbon footprint has been one factor behind the rapid growth in plant-based alternatives such as oat, soy and almond “milks”.

Morrisons said customers should check milk by holding the bottle to their nose. If it smells sour then it may have spoiled. If it has curdled and lumps have formed that is also a sign it should not be used. Milk’s life can be extended by keeping it cool, and keeping bottles closed as much as possible.

Morrisons is the UK’s fourth-largest supermarket behind Tesco, Sainsbury’s and Asda with a 10.4% market share, according to data company Kantar.

The move will initially cover 90% of the supermarket’s own-brand milks, including own-brand British and Scottish milks, Morrisons For Farmers milks, and Morrisons organic milks. The supermarket had already scrapped “use-by” dates on some of its own-brand yoghurt and hard cheese ranges in 2020.

Marcus Gover, Wrap’s chief executive, said: “I am delighted that Morrisons is the first UK supermarket to take this important step to help reduce household food waste – it shows real leadership and we look forward to more retailers reviewing date labels on their products and taking action.”

Best practice guidelines drawn up by Wrap with the Food Standards Agency and the government say a “use-by” date is only required for food safety reasons, which don’t apply for milk.

“Generations before us have always used the sniff test – and I believe we can too.”

As 2022 begins, and you're joining us from India, there’s a new year resolution we’d like you to consider. We’d like to invite you to join more than 1.5 million people in 180 countries who have taken the step to support us financially – keeping us open to all, and fiercely independent.

In 2022, we’ll be no less active, with a cluster of elections (France, Brazil, the US to say the least), economic pinch points, the next phase of the pandemic, the gathering climate emergency and the first ‘winter World Cup’ to keep us busy.

With no shareholders or billionaire owner, we can set our own agenda and provide trustworthy journalism that’s free from commercial and political influence, offering a counterweight to the spread of misinformation. When it’s never mattered more, we can investigate and challenge without fear or favour.

Unlike many others, Guardian journalism is available for everyone to read, regardless of what they can afford to pay. We do this because we believe in information equality. While others commoditise information, we seek to democratise it. Greater numbers of people can keep track of global events, understand their impact, and become inspired to take meaningful action.

If there were ever a time to join us, it is now. Every contribution, however big or small, powers our journalism and sustains our future. Support the Guardian from as little as $1 – it only takes a minute. If you can, please consider supporting us with a regular amount each month. Thank you.