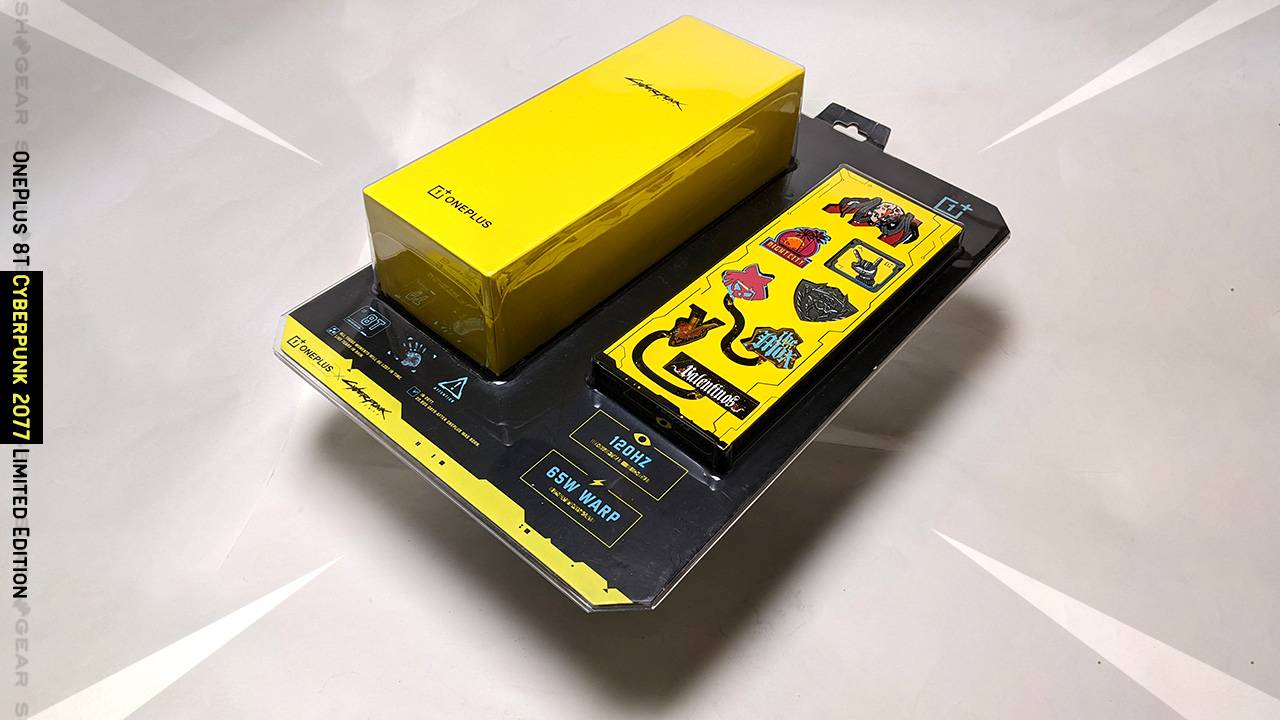 The in-store packaging for this most special of editions of the OnePlus 8T for Cyberpunk 2077 is pinhole hook (inverted T shape punch hole) ready. It’s like a blister bubble package you’d see for a vintage Star Wars action figure, only better. This sort of packaging with a product like this evokes a clash of messages, a dissonance of senses in the buyer: ease of access and potential for great value.

Items packaged for the pin are traditionally made in large numbers, made to hang on a peg for a moment, placed in a shopping cart the next. In the last decade, big-name fashion brands and radical product creators have adopted this package aesthetic to capitalize on that nostalgic collectable toy feeling – even and especially for products that are NOT cheap.

Alongside this most special of editions you’ll find a set of metal pins. These unique designs replicate imagery found in the game Cyberpunk 2077. You’ll find one of these pins in the phone box too.

The inclusion of the same pin in the extended pack and the basic phone box indicate that there’s more than one potential form for this device – one with the extra pin set, one with just the phone box and the single pin.

There’s a pack at the back of this box that contains a special Cyberpunk 2077 protective case and a bonus pin.

The detailing in the yellow board packaging surrounding the box is particularly beautiful. This piece is thick – thick enough to include an indented design, a standard print layer, and a holographic foil layer of print.

It’s a credit to the designers of this extravagant packaging that I’d find it shocking if any buyer ever tossed any part of said packaging in the garbage. Basically every bit of this design deserves to be put on display.

In the paper materials included in the phone box is a familiar sort of ephemera. This multi-layer element is a part of the unboxing experience we’ve seen included with OnePlus phones before.

The USB cord included with the package, along with the SIM card pin, appear to be the ONLY elements that are entirely the same as they are with the standard OnePlus 8T. No Cyberpunk 2077 aesthetics included.