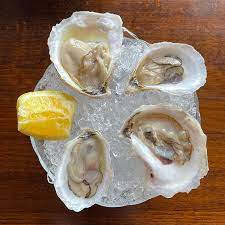 Eric Oransky of Maine Ocean Farms joins his crew of four on a Wednesday morning in Freeport, loading coolers and large containers of ice on what's expected to be a large harvest of farmed oysters.

Oransky and his colleague, Erin Adams, loaded the coolers down to Carter, who also works at Maine Ocean Farms.

Once packed, they made the journey to the floating oyster farm and take in a few hundred Wet Smack and Recompense Cove Oysters, their signature oyster breed.

"We put them in an ice slurry to bring the temperature down quickly. We want to deliver them at less than 40 degrees," Adams said.

Adams, along with the three other crew members, made fast work of the dozens of bins holding the oysters, which take three to four years to reach market size.

Tucked in bags of 50 or 100 each, the oysters made their way to markets in the greater Portland area.

But while oysters are considered a booming farm industry and sustainable Maine seafood, the packaging used to transport oysters, and other seafood is not sustainable.

Plastics are used in most cases, much of which gets tossed in the trash, along with the shells of seafood, according to Alex Kane with ecomaine.

"There are a lot of people not knowing what an object's purpose is when they're done with it," Kane said.

Kane is an environmental educator with ecomaine, which is one of the largest waste management facilities in the Portland area. She said summertime sees an influx of seafood and packaging waste.

"In the summer, everyone wants their lobster and clams. And with that comes waste, too. I would like to see a better way of shellfish being handled as it goes to shelves and the consumers," Kane said.

Kane added much of the plastic crews find mixed with food waste during garbage collection cannot be separated due to a lack of manpower.

But Maine Ocean Farms is trying to dodge the trash and recycling sorting altogether with a business branch called Ocean Farm Supply.

Adams is one of the leaders in the new business and said the goal is to sell seafood packaging made of compostable materials.

"It's just something that really makes sense to us from the beginning to lower emissions. Lower impact on the environmental end [and] it goes right back into the soil. You can just focus on your premium shellfish and not worry about waste," Adams said.

Ocean Farm Supply uses beechwood fibers imported from Austria. Adams said the current mesh bags made from the fibers are currently about twenty percent more expensive than traditional plastic but hopes it will come down with increased demand.

"They saw this program, and we're trying to find a solution. And we were able to create a solution, share that and have it be available to other farmers. It's been really fun," Adams said.

In August, Adams and Ocean Farm Supply staff got the keys to a coworking space at the TechPlace in Brunswick to collaborate and produce pre-tied bags for large-scale shellfish farms.

"This is exactly what we're looking for, so it fits. It makes complete sense," Adams said. "That's the Maine attitude. If there's a problem, you find a solution and get it done."