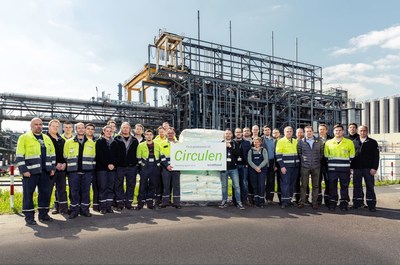 LyondellBasell (NYSE: LYB), one of the largest plastics, chemicals and refining companies in the world, and Neste (NESTE, Nasdaq Helsinki), the world's largest producer of renewable diesel from waste and residues, today jointly announce the first parallel production of bio-based polypropylene and bio-based low-density polyethylene at a commercial scale.

LyondellBasell production team in Wesseling, Germany shows off first batch of bio-polymer made from renewable materials. The joint project used Neste's renewable hydrocarbons derived from sustainable bio-based raw materials, such as waste and residue oils. The project successfully produced several thousand tonnes of bio-based plastics which are approved for the production of food packaging and being marketed under Circulen and Circulen Plus, the new family of LyondellBasell circular economy product brands.

"LyondellBasell has an innovative spirit that spans decades, and an achievement like this showcases concrete actions we are taking in support of a circular economy," said Richard Roudeix, LyondellBasell Senior Vice President of Olefins and Polyolefins for Europe, Asia and International. "Through the use of renewable resources, we are contributing to the fight against climate change and helping our customers achieve their environmental targets."

"We are excited to enable the plastics industry to introduce more bio-based material into its offering. It is very satisfying to see Neste's renewable hydrocarbons performing perfectly in a commercial scale production of bio-based polymers, providing a drop-in replacement option to fossil materials," said Neste's President and CEO Peter Vanacker. "This pioneering collaboration with LyondellBasell marks a major milestone in the commercialization of Neste's renewable polymers and chemicals business focusing on developing renewable and circular solutions for forward-looking sustainable brands."

This achievement is extraordinary in that it combined Neste's unique renewable feedstock and LyondellBasell's technical capabilities. LyondellBasell's cracker flexibility allowed it to introduce a new renewable feedstock at its Wesseling, Germany site, which was converted directly into bio-based polyethylene and bio-based polypropylene. An independent third party tested the polymer products using carbon tracers and confirmed they contained over 30% renewable content.

LyondellBasell sold some of the renewable products produced in the trial to multiple customers, one of which is Cofresco, a company of the Melitta Group and with brands like Toppits® and Albal®, Europe's leading supplier of branded products in the field of household film. Cofresco plans to use the Circulen Plus bio-based polyethylene to create sustainable food packaging materials.

LyondellBasell (NYSE: LYB) is one of the largest plastics, chemicals and refining companies in the world. Driven by its employees around the globe, LyondellBasell produces materials and products that are key to advancing solutions to modern challenges like enhancing food safety through lightweight and flexible packaging, protecting the purity of water supplies through stronger and more versatile pipes, improving the safety, comfort and fuel efficiency of many of the cars and trucks on the road, and ensuring the safe and effective functionality in electronics and appliances. LyondellBasell sells products into more than 100 countries and is the world's largest producer of polymer compounds and the largest licensor of polyolefin technologies. In 2019, LyondellBasell was named to Fortune magazine's list of the "World's Most Admired Companies." More information about LyondellBasell can be found at www.LyondellBasell.com.