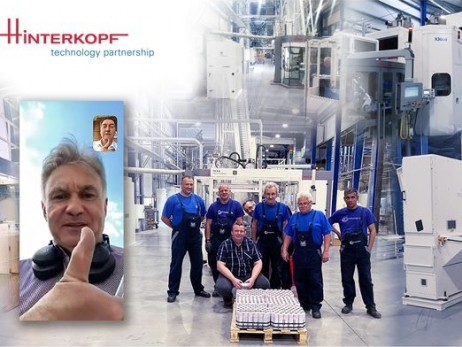 Because of increasing demand, Mátrametál decided last year to purchase a new aerosol can production line from Hinterkopf. The majority of machines and components were already delivered in February of this year. The remaining components, including a new impact extrusion press from Hinterkopf, arrived in Hungary during the middle of March. Despite the Corona lock-down, demand and production pressure at Mátrametál remained high. It was therefore critical to commission and start-up the new aerosol line promptly. Borders between countries had been closed since the end of March, which made it necessary to get creative and seek new ways to commission the new production line. Utilizing remote-access, online tools, many phone calls, video conferencing, email and WhatsApp chats allowed the project to continue. Remarkable initiative and determination by everyone involved made it possible to start-up the production line at the beginning of April. Hinterkopf GmbH would like to express their sincere appreciation to everyone involved, and to say Thank you! for all the tireless efforts made in order to complete the first “online commissioning”.