The epidemic did not stop him either: the new production line of Mátrametál was launched! 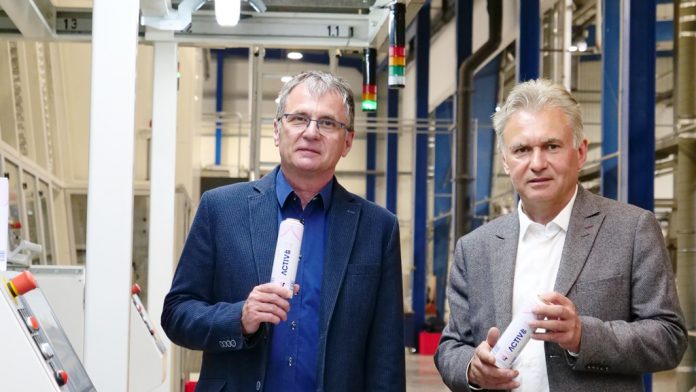 The economic crisis caused by the coronavirus could not slow down the expansion of the Sirok business with a long history. This week, Mátrametál's new production line was assembled and launched with brilliant technical solutions, despite the fact that the specialists of the constructive German partner could no longer enter the country. As reported by Kékes Online , last February, in the presence of Minister of Finance Mihály Varga and László Horváth, Member of Parliament for the region, a document on the HUF 1.8 billion support of the Government of Hungary was handed over to the company. Using the amount provided from domestic sources within the framework of the Large Enterprise Investment Support Program, a modern aerosol bottle production line and finished goods warehouse with a monitoring and control system were built in the amount of HUF 3.6 billion, and the hall capacity was also expanded. Ferenc Lovas, the managing director of Mátrametál Kft, told Kékes Online that they had reached the end of the implementation of the investment, and the first phase of trial production had started this week. The usual protocol event was abandoned this time in view of the epidemic, but the company management invited László Horváth to the festive moment, thanking the representative for his supportive work. The managing director said that the construction of the production line took a year, during which they relied on two significant partners, the architectural investor was Tengely-Közmű Kft. Ferenc Lovas also revealed that the last phase of the works was not as planned due to the pandemic, but their efforts were still crowned with success. “We received the last two pieces of equipment at a time when German mechanics were no longer able to enter the country with the machines due to the border lock. Thus, these were built locally by Mátrametál's colleagues under the remote control of the German partner. The lines of production and the start of production were coordinated in the same brilliant way. We made this difficult decision together with the contractor, but our ambitious German partner, like us, also undertook this unusual solution. We really didn't have to convince each other, we cut in, ”the company manager recalled with a smile. During this period, we were in constant contact for 8-10 hours a day, through all the means of communication available today. Video conferencing, telephones, emails and special, As we learned from Ferenc Lovas, the company's capacity was expanded with a much more efficient line. Thanks to the development, they can produce 40 million more aerosol bottles a year. - Previously, our capacity was sufficient to produce 100 million bottles a year, now we can produce 140 million. This expansion is only a number in itself, says Ferenc Lovas, because this capacity must also be filled with orders. To this end, we have carried out a very significant market expansion work in the last year in parallel with the technical development. Thanks to this, today I can say that in addition to the existing one, we already have continuous orders for the new production line. The managing director explained that Mátrametál Kft operates in a very diversified, complex market. Geographically, from the Middle East, through Britain, from Russia to Germany, their products are present in virtually every country in Europe. 99% of aerosol bottles are sold on the export market, as there are very few filling plants in Hungary. According to the head of the company, their competitive advantage also stems from the fact that they also undertake smaller batches and specialize in the production of special bottles. These products are made of aluminum, which is utilized by the cosmetics industry. - Along such a market strategy, we are less exposed to a larger customer, from which we could suddenly lose a significant order book in the event of such a crisis. This security comes in handy these days, as we have canceled orders, but we can find new ones instead. Moreover, in the field of packaging for hand sanitizers, of course, there is a very big upswing, we can hardly serve the market needs - the head of Mátrametál introduced the details of the background work. Seeing the order backlog, we are confident that we can now see that the company will go through this critical period smoothly, the CEO concluded. According to László Horváth, Mátrametál excelled in crisis management. The Member of Parliament thanked the management of the company and through them for the dedicated and strained work of the 360 ​​people working here. As he put it, this development is a symbol of confidence in the successful future of the company and the region. Government support has arrived in the right place and at the right time, so it will give the region another competitive advantage instead of the economic stagnation caused by the epidemic.

The epidemic did not stop him either: the new production line of Mátrametál was…
video conferencing
telephones
emails and special