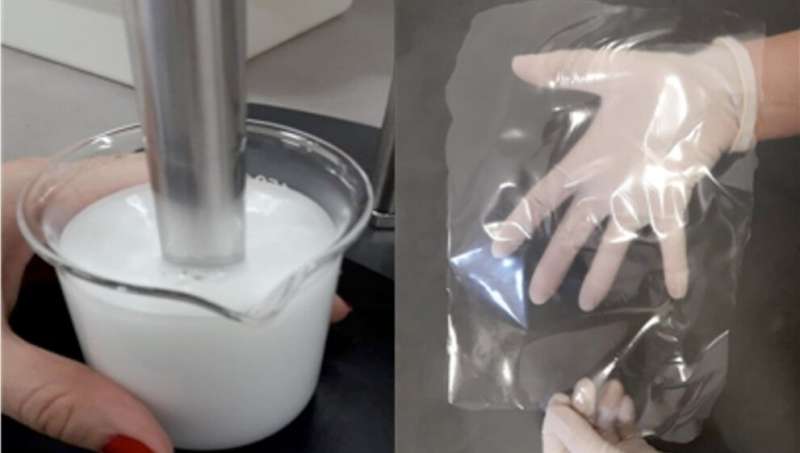 Given all these drawbacks, reducing the use of fossil fuels to produce plastic is the target of a great deal of research around the world. Many scientists are working on the development of biodegradable packaging materials that also prevent contamination by microorganisms and extend shelf life so as to reduce losses.

A study conducted by a research team called the Composites and Hybrid Nanocomposites Group (GCNH) at São Paulo State University (UNESP) in Ilha Solteira has produced an important contribution to this effort. It was supported by FAPESP, and an article reporting its findings is published in the journal Polymers.

The researchers made their bioplastic (or "green plastic", as it is also known) from type B bovine gelatin easily found in retail stores in the form of a colorless powder.

"Gelatin was one of the first materials used in the production of biopolymers. It's still widely used owing to its abundance, low cost and excellent film-forming properties," said chemist and materials scientist Márcia Regina de Moura Aouada, a professor at the Ilha Solteira School of Engineering (FEIS-UNESP) and last author of the article.

"However, biopolymers for packaging have characteristics that need to be improved in order to be comparable to petroleum products, especially as far as mechanical properties and vapor permeability are concerned, so we added cloisite Na+ nanoclay to the gelatin," she explained.

Adding nanoclay made the film more homogeneous and increased its tensile strength to 70 megapascals (MPa). Conventional polyethylene packaging has less than half this tensile strength (in the range of 20 MPa-30 MPa).

"Besides nanoclay, we also added a nanoemulsion made from black pepper essential oil to give the packaging a more attractive flavor and odor. The mixture also extends the shelf life of food products packaged with the material, thanks to the inclusion of anti-microbial and anti-oxidant components in the polymeric matrix," she said.

It is worth noting that the bioplastic in question was originally designed to package beef in the form of hamburgers, which are vulnerable to microbial contamination and have a strong smell, but the principle of adding nanoclay and essential oil nanoemulsion to a gelatin matrix can and will be extended to other foods, varying the type and proportion of essential oil used.

"If this kind of packaging becomes widespread in the marketplace, it could significantly reduce the use of plastic made from non-biodegradable polymers and hence the amount of solid waste," Moura Aouada said. "In addition, the bioplastic will better protect packaged food against contamination by pathogens and help reduce losses."

The research lines followed at GCNH-UNESP focus on the circular economy, which converts waste into resources. The group's leaders, Fauze Aouada and Márcia Moura Aouada, are professors affiliated with UNESP's Program of Graduate Studies in Materials Science (PPGCM).

"Our proposals are aligned with the Sustainable Development Goals [SDGs] adopted by the United Nations to end poverty, foster the planet's economic sustainability, and ensure that the entire world population can enjoy peace and prosperity," Moura Aouada said.