DS Smith releases blueprint for packaging made from self-healing “skin” 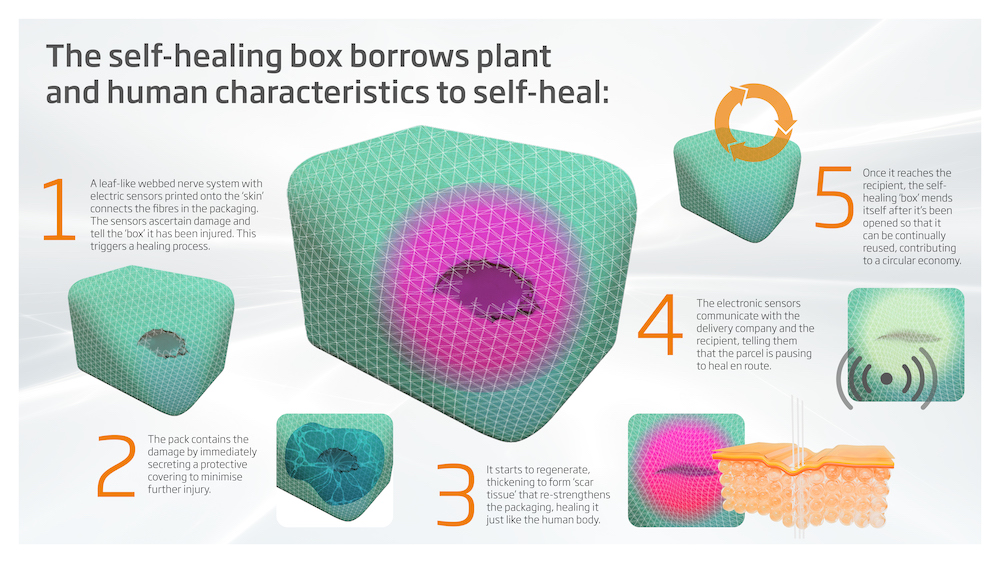 DS Smith describes itself as a “leading provider” of sustainable fibre-based packaging worldwide, which is supported by recycling and papermaking operations. The company says it has released the blueprint to coincide with the 150th year of the cardboard box and shows how how the packaging may evolve over the next 50 years.

DS Smith says the characteristics of the intelligent, self-healing box include a webbed nerve system that borrows from the composition of leaves. Sensors are printed onto the “skin” of the box and connect all fibres in the packaging so that it can ascertain the damage and communicate externally.

Secondly, it features regenerative “scar tissue” which heals itself like the human body. The surface stretches and thickens to cover the injury, and transmits data to the delivery company and the recipient to tell them it is pausing to heal itself while in transit.

The final characteristic of the box DS Smith describes is its reuse capability. After it has been opened, the packaging heals the opening of the pack, so that it can be continually reused to extend its life.

As well as the self-healing box blueprint, DS Smith says it also expects to see developments in the fields of self-adjusting parcels and spray-on packaging.

To mark the 150th year of the cardboard box, DS Smith has created a retrospective of corrugated cardboard, which it says charts its journey over time and how it has woven its way through society for hundreds of years.

DS Smith says the digital archive celebrates past and present achievements in the race for innovative ideas, such as plastic replacement designs like Eco Carrier, and parcels that can withstand cold and wet conditions, such as Greencoat.

Innovation Director at DS Smith, Wim Wouters, said: “There is already a trend for the technologies we use every day to look after themselves – self-driving cars are the obvious example.

“Packaging that heals itself so it can be perpetually reused is of course a futuristic concept, but today we’re already using circular principles to design out waste and recycle the fibres we use up to 25 times, so a circular economy where materials stay in use for much longer might be closer than we think.”

“I think we will eventually see intelligent packaging that self-adjusts its size to fit its contents, making the absolute most of materials and space. And, taking inspiration from the unique dress that captured the world’s attention during Paris Fashion Week, we will surely see a time when spray-on packaging becomes real.

“Right now, the reality is that boxes can already be high-performance kits. It’s possible to make them water and humidity proof, anti-microbial, and to track them throughout their journey with printable nanotechnology.