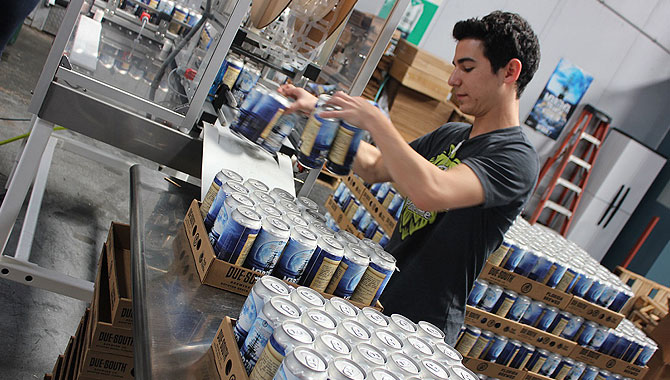 In addition to increasing their distribution capabilities the G1 significantly reduces downtime when switching between the 12oz and 16oz can formats Due South produce. Thanks to its easy-to-use design, the applicator takes only a few minutes to change configuration, providing flexibility to drinks producers’ canning operations.

Commenting on the decision to install the G1 applicator and its performance in its 1st year, Due South Founder Mike Halker said: “The WaveGrip machine is really consistent, after getting the machine dialled in, which was very simple, it’s been rare for us to have any issues at all.” He added “I don’t think it’s a decision I’ll ever regret.”

Based just outside of West Palm Beach, Due South have undergone a huge expansion in the past year, doubling in size with the opening of a new 3000sqft taproom. The fully air-conditioned venue is equipped with 23 taps, including two dedicated nitro-lines and it even contains dog friendly space.

With five core beers produced year-round, Due South have created nearly 60 different beers during 2018. These have ranged from small batch experiments to fully distributed headliners, including a popular a winter seasonal cranberry brut blonde ale.

Aaron McIvor, Managing Director, WaveGrip comments: “It’s great to see how much the brewery has grown almost a year on. We’re so happy that the G1 is still living up to the needs of Due South and are excited to see how far their beers travel thanks to WaveGrip.”