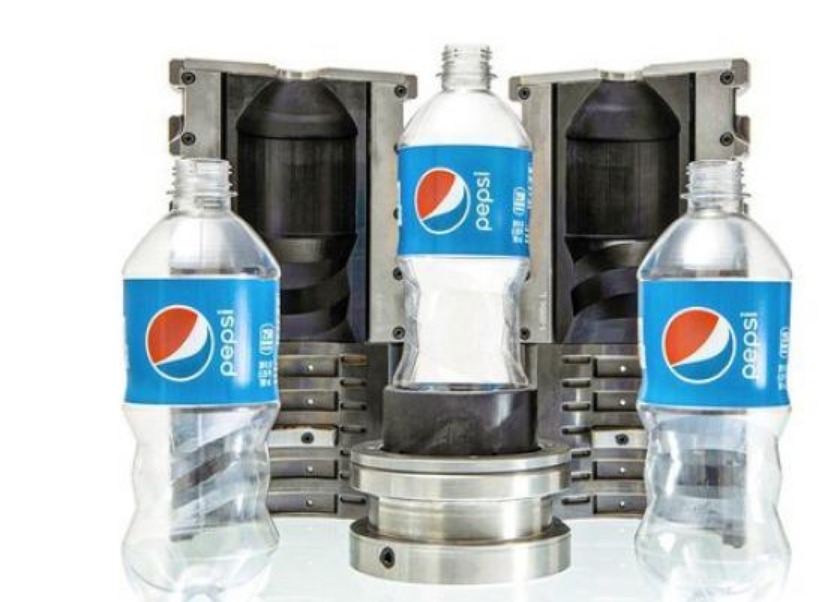 The bottle design development process at PepsiCo moves from paper to digital to 3D printed prototype to 3D printing the mold to produce functional prototypes (Source: PepsiCo)
PepsiCo could spend up to $10,000 to produce a single metal mold tool set depending on its complexity, according to Max Rodriguez, senior manager of global packaging R&D, advanced engineering and design, at PepsiCo’s research center.

Once a digital design of the bottle is created, it would take up to four weeks to machine a metal mold using conventional manufacturing, and then an additional two weeks to get a trial unit to do the actual blow molding of the prototypes.

To get new products to market faster by lowering the time and cost of prototypes, Rodriguez started working with 3D printers several years ago.

Although 3D printers were excellent at producing design prototypes, early attempts to 3D print mold tooling lacked durability. When the 3D printed molds were used in blow molding machines, they could produce only about 100 bottles before the mold began to fail. This prompted Rodriguez and his team to explore using a hybrid approach, combining parts of a conventional metal mold with 3D printed inserts.

This hybrid model – which PepsiCo patented in late 2020 – involves using a universal metal outer mold shell that fits into most commercial blow molding machines. PepsiCo then explored using additive manufacturing to print only the essential internal parts of the mold that yield the final product’s geometry.

“Our relationship with PepsiCo began years ago with desktop 3D printers for their design prototyping,” says Dynamism CEO Douglas Krone. “When their needs turned to industrial applications, we introduced them to 3D printers designed for production industrial parts.”

Between 2020 and 2022, Rodriguez conducted proof-of-concept trials with a pilot-plant-scale blow molder at a third party, running bottles at a rate of 600 to 800 bottles per hour, with a single hybrid mold. The modular mold set concept was a success, but the durability of the materials was still a challenge.

“When tackling a solution for mold tool generation using additive manufacturing, we were focused on identifying a material that would withstand the blow molding conditions typically found in our production environment,” says Rodriguez. “In blow mold heat set applications, it is common in the industry to heat the molds to a temperature of about 140ºC. It was also important the material be able to withstand a blow pressure of 40 bars.”

The only viable material solution at the time Rodriguez started his research about three years ago was cyanate esther, he says. “Since then, the major material suppliers, such as Henkel Loctite and BASF, accelerated their material development for additive manufacturing applications.”

Henkel introduced its XPEEK147 material about a year ago, which provided several advantages cyanate esther, according to Rodriguez.

The team applied a backing of dental stone to the printed inserts to give the mold cavities the compressive strength needed for blow molding pressure. It then used a modified, lab-scale Blowscan stretch blow molding machine from Northern Ireland-based Blow Moulding Technologies to produce the actual test bottles.

PepsiCo has been producing bottles on a daily basis using its hybrid tooling approach for the past few months, says Rodriguez. “Time and cost are obviously important, but more important is to have the flexibility to run through a number of different design iterations at a record pace so that we can evaluate performance in all of the downstream activities. That really is what helps us to accelerate.”

These downstream activities include confirming how the bottle will perform on PepsiCo’s packaging lines, in vending machines, and throughout its distribution network.

The blow molding trials at PepsiCo’s R&D center provided the data that showed the samples from the 3D printed mold were comparable to samples from a metal mold.

Rodriguez has 3D printed molds on the Carbon M2 printer, the Stratasys J55, and the Markforged X5, to validate that the mold-tool concept is printer agnostic, but ultimately chose the Nexa3D NXE 400 and its xPEEK147 material from Henkel Loctite for the 3D printed tool inserts.

The NXE 400 is large enough to print several mold parts at the same time, plus it’s fast, which speeds up the iteration and production process.

4 weeks to 48 hours, $10,000 to $350
A complete mold set can be made in 12 hours, with 8 hours of 3D printing time and 4 hours of post-processing or curing. The cost is about $350 per mold set. These hybrid-made molds can be used for more than 10,000 bottles before failure. The result is a nearly 96% reduction of cost compared to traditional metal tooling.

“Through the use of these capabilities,” Rodriguez says, “we expect a 30% faster development cycle.”  However, this is not only related to the ability to 3D print a mold set. “The 3D printing capability is coupled and interlaced with our virtual analysis capability. AM complements virtual analysis, and vice-versa, so the faster development cycle is accomplished by leveraging these advanced tools collectively.”

The 3D printed mold insert and the lab-scale blow molding machines are used to generate low-volume production functional samples. “The intent is not to replace metal molds for high-volume production,” notes Rodriguez. “The 3D printed mold sets can be mounted on a typical stretch blow mold production platform, as its exterior shell dimensions are universal and compatible with our typical production platforms. However, for regular production, it is best to invest in metal tooling, as we are expecting the molds to produce millions of bottles per year.”