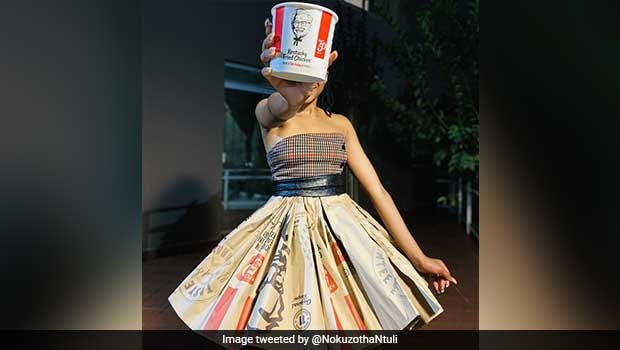 The one thing that you will find in abundance on the internet is creativity. From interesting ideas to unique fusion dishes, there's something new to be learned or be inspired from at every scroll on your social media feed. The concept of sustainable fashion is also increasingly gaining momentum these days. Bloggers and even citizens are trying to minimize waste and reuse their clothing in as many ways as possible, in order to do their bit for the planet. A fashion blogger has recently gone the extra mile to make her clothing as environment-friendly as possible. The girl created a dress made with recycled packaging from the popular fast-food chain Kentucky Fried Chicken (KFC). Take a look:

The pictures were posted on Twitter by user @NokuzothaNtuli, where they have received 12.5 likes and thousands of comments. "Decided to make this dress for KFC from recycled KFC packages to show how much of KFC super fans we are," she wrote in her tweet. In the pictures, we could see her posing with a frilly dress and a bucket of KFC food. A closer look revealed that the pleats of her dress were made with recycled packaging from KFC, with the iconic Colonel Sanders logo featuring prominently.