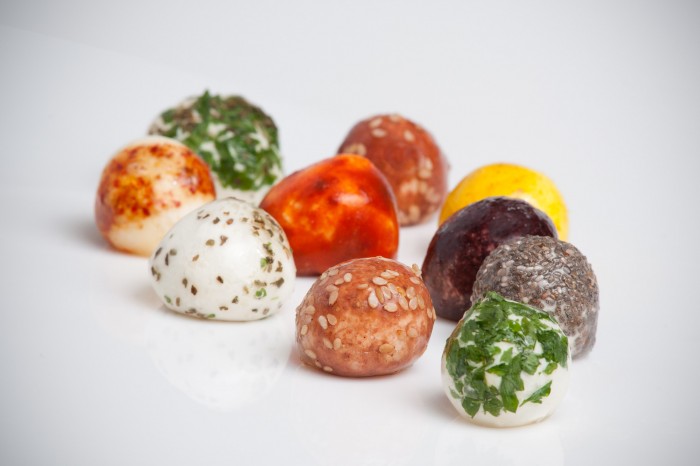 A few years ago, innovative biomedical engineer Dr David Edwards and his team at WikiFoods unveiled their answer to superfluous food packaging, the WikiCell. It is a biodegradable, film-like membrane that carries different foodstuffs in small amounts. It claims to be an alternative to plastic and a totally ‘green’ way to transport and consume food.

Even though the WikiCell membrane is thin and soft, it can hold most kinds of food without breaking – liquid, foam, mousse and even solids. Quite like the protective skins of most fruit, the WikiCell has a double-layer that helps to keep its cargo intact.

Edwards’ repertoire of food-based innovation includes the design of inhalable chocolate and a Tuberculosis vaccine in spray form. The WikiCell became a project as the offshoot of a collaboration between the professor and French designer Francois Azambourg. They developed an edible bottle that was inspired by an example of nature’s own packaging – the grape.

Edwards explained the concept behind the WikiCell membrane to Fast Co:

"The notion is that you are englobing liquid, foam, or something else in a soft membrane held together by food particles that are being connected by electrostatic charges to each other and to a small amount of natural polymer," he said.

It is gelatinous and soft, quite like the translucent cell that holds the yolk of an egg. And quite like an egg, the WikiCell features a secondary outer shell that is made of a hardened composite, such as chocolate or isomalt. This auxiliary layer adds some stability and longevity to the otherwise fragile design.

Just as various fruits in the natural world feature different protective solutions (such as the coconut’s hairy shell or the lemon’s leathery peel), so has WikiFoods developed a range of membranes to best accommodate unique food types. The outer shell is crafted according to the mixture inside.

The edible shell is usually made from isomalt, a kind of sugar substitute, and the biodegradable version, which is peeled away and discarded like the skin of an orange, is made of tapioca or baggase, the remains of sugar cane after sugar has been extracted from it.

The Harvard professor and his team use specialised technology that synthesises these soft, tasty membranes. Three molecular ingredients are needed to craft the pseudo-biological material – some microscopic food particles (found in seeds, nuts, fruits or chocolate), a nutritive calcium that is ion-like and chitosan (a sugar substance that is found in hard shellfish skeletons) or alginate. The resulting mixture is an electrostatic gel that is liquid-resistant.

WikiFoods has produced multiple kinds of WikiCell flavours: a tomato and basil membrane holds gazpacho soup, another is flavoured with orange extract to hold orange juice which can be punctured easily with a straw, and another membrane has been developed with cocoa particles to hold hot chocolate.

Now that Edwards and his team have refined the detailed molecular structure of the WikiCell, mass-distribution and long-haul durability are in the developers’ sights. Though WikiCells are still mostly found in select restaurants (such as Edward's Lab Store Paris, where the adventurous eater can sample WikiFoods' experiments), the company aims to develop a commercially viable version that can aid emerging countries to nourish its inhabitants without compromising ecological integrity in the process.

Whenever a product moves into the territory of edible design, the question of hygiene must be addressed. Since the WikiCell is made to be transported as well as consumed, the user is urged to wash the shell in the same way one would rinse an apple before chowing down. In the case of biodegradable WikiCells, the shell can simply be peeled off and discarded.

The developmental barriers that usually impede the production of alternatives to plastic have not included the lack of creativity. In fact, many unique biodegradable packaging designs have been implemented successfully through the years in niche cases, but it is the mixture of durability, low cost and massive scale that has made plastic so successful globally and difficult to match by any competing ecological solutions.

WikiCell’s simple and effective design may be able to overcome those hurdles, as Edwards said to Business Insider: "This may be the first scalable, inexpensive, stable packaging solution that fully eliminates plastic. Beyond being edible, the reality is it's solving a major industry, health and environmental need today.

" The technology has already been adopted by a few health food brands, specifically Whole Foods in the US and Stoneyfield, a New Hampshire company that distributes local dairy products.

"Our perspective is that eventually, the packaging of tomorrow will be the fruit of today," said Edwards.