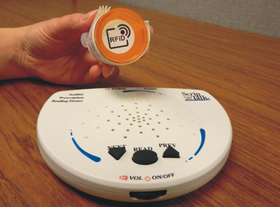 The units are called prescription readers. They read a chip applied to medication bottles and convey information about dosage, side effects, refills, etc. James Edwards of the Oregon chapter of the American Council of the Blind says the unit can be a literal life-saver.  “Just imagine yourself being blind and you have to take, say, six different medications because of some certain illness that you have, and not being able to read it,” he said.

“It was kind of an archaic way of doing it, but it was the only option they had if they lived alone,” said Edwards.

He said another option for visually-impaired people was to hire an aide, but not only could that be expensive, it also contributed to a loss of independence.

The Florida-based company that manufactures the most widely-used prescription reader estimated in submitted testimony that it would cost pharmacies approximately $400 per year to lease the equipment needed to dispense the labels, plus another $2 per label applied to a prescription. The readers themselves are provided by the company at no cost.

House Bill 2935 was modeled after a similar law in Nevada. The Oregon measure passed both the House and Senate on a mostly party-line vote, with a handful of Republicans joining majority Democrats in support of the bill. Gov. Kate Brown signed it into law on June 20.