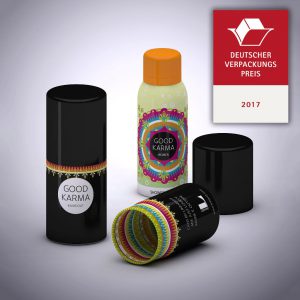 LINHARDT wins the German Packaging Award 2017. With the “double wall can” (with decoration inside), the company brought the industry’s most prestigious award to Viechtach. “We wanted to show what is possible with our traditional, but highly complex manufacturing process,” says Johann Beil, Head of Research & Development. Something that did not exist before. Or only with great effort to produce. Several items had to be combined. Now LINHARDT has managed to produce such an exceptional package “in one go” and with the means of mass production. Further addition to this is WorldStar Award. As defined by the double-wall can, LINHARDT says: “Double keeps better!” We are pleased to announce that the double wall can “Good Karma” has now also been awarded the World Star Award in addition to the German Packaging Award. 318 submissions from 38 countries were judged by an international jury of the World Packaging Organization in Rio de Janeiro. LINHARDT is one of the winners!