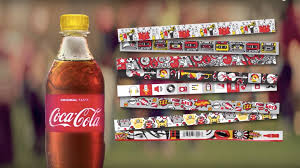 No one does packaging stunts quite like Coca-Cola, and here’s another clever idea from the soda giant—bottle labels that detach and become working wristbands that young people can use to access music festivals. The wristbands, developed by McCann Bucharest, came in eight designs. Not every one granted access to a festival—you had to scan it with a special app to see if it was a winner—but McCann says youngster started collecting and wearing them as fashion statements. Among Coke's festival partners is Transylvania's Untold, one of the premiere musical events in Europe. The ad campaign was supposedly prompted by market research showing that four in 10 Romanian teens hadn't had Coke in the past month. The soda company now claims the efforts has already reached three quarters of that same group and boosted sales by more than 10 percent in the country.