Banana leaves likely to be used to package food 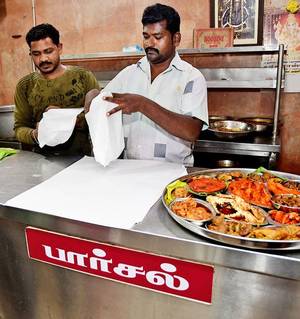 The Greater Chennai Corporation is likely to order restaurants and eateries to use banana leaves instead of plastic for packaging food, based on recommendations by private conservancy operators. The number of food business operators using plastic packaging is estimated to be 20,000.

Upon studying the models of solid waste management in cities such as Tokyo and Dubai, a private conservancy operator suggested using better technology, implementing stringent policies and raising awareness among citizens to reduce landfill tonnage to 20%, similar to that of Tokyo. While Dubai has reduced the quantity of waste in landfills to 30%, in Chennai it is still at 85%. The Corporation is planning to launch a campaign to promote source segregation in households and commercial establishments.

Former Corporation floor leader V. Sukumar Babu said at least 150 commercial outlets were using plastic packaging materials to sell food in each of the wards. “The Corporation should raise awareness about using banana leaves as packaging material in eateries. Residents will support the move, but the eatery staff may need proper orientation from the Health Department. The Corporation should resume training sessions for food handlers to improve public health,” he said. Some suggestions by private conservancy operators, like micro-composting meat waste, are unlikely to be implemented as residents have protested against the move due to the stench it creates.

Proposals for incinerators in each zone will not be accepted due to air pollution. Imposition of penalties on households that fail to segregate waste will not be implemented since the Corporation plans to incentivise source segregation, an official said.