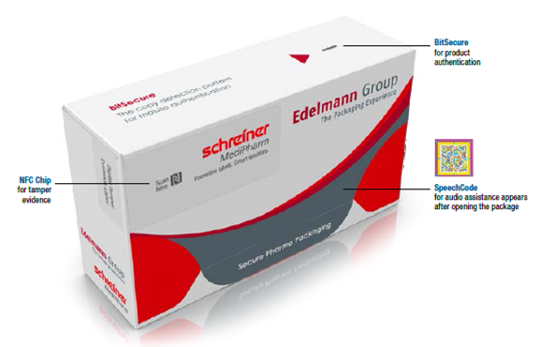 BitSecure for Product Authentication - The printed, digital security feature BitSecure is based on a high-resolution, random pattern whose delicate details are not discernible by the naked eye. In an attempt to copy the small random pattern with a size of just a few square millimeters, the printed image will suffer a loss in precision and optical details. The pattern can be authenticated quickly and flexibly on-site using a smartphone or handheld reader and analyzed by means of related software.

NFC Chip for Tamper Evidence - The closure seal with an NFC chip is a digital and, due to an additional void effect, also an analog form of tamper evidence: Before opening the seal for the first time, the user reads the NFC chip using a smartphone to receive confirmation of the product’s authenticity. If the seal is opened, the perforation cut through and the NFC chip read again, a warning on the smartphone will indicate that the packaging has previously been opened. This makes any tampering attempt clearly visible.

SpeechCode for Audio Assistance - With the digital “SpeechCode” (developed by the Austrian company of the same name) voice information can be read out via a colored 3D code by means of a smartphone app. The 3D code is generated similar to a QR code, but instead of a web link uses a stored encrypted text of up to two A4-size pages. When patients scan the code by means of a respective app, the stored text will be read to them. Speech-Code is an offline audio assistance, particularly for older people and persons with impaired vision or literacy problems.