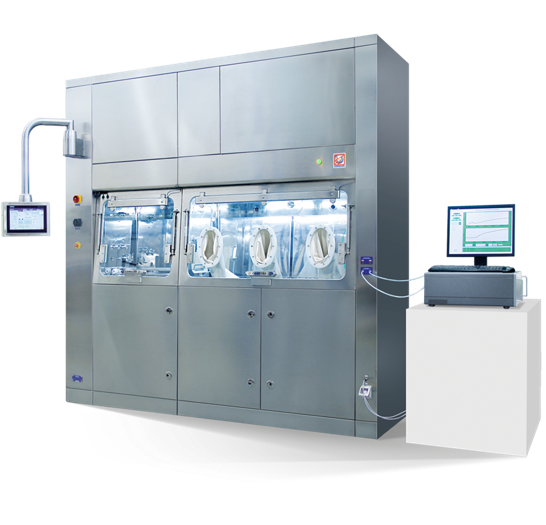 Once the decontamination phase of the VPHP cycle is over, an aeration phase starts with the aim to rapidly decrease the vapour of hydrogen peroxide up to the concentration of 1 ppm. In fact, 1 ppm has been officially defined by the National Institute of Occupational Safety and Health (NIOSH) as the daily safety value for the operators and for the exposure of the production materials3.

Recently, several studies focused on the hydrogen peroxide residues upon the decontamination cycle and critical effects on the pharmaceutical products are now emerging. The oxidation of pharmaceutical molecules, the dissolution into liquid products and the adsorption within medical materials are just few consequences of the effect of sub-ppm VPHP concentrations4–6.

For instance, concerning the biotech pharmaceutical compounds that contain many aminoacidic residues sensitive to oxidative potentials, it does not represent a negligible topic. In fact, several groups are trying to mathematically model the effects of sub-ppm concentrations of hydrogen peroxide on their pharmaceutical products7–9.

The modified isolator can firmly control VPHP concentrations ranging from 5 part-per-billion (ppb) to few ppm through a system referred to as Ultra-Low VPHP (UL-VPHP).

The core of the UL-VPHP system is represented by the hydrogen peroxide Picarro probe (Picarro PI2114 spectrometric gas concentration analyser, hereafter referred to as Picarro) that allows an online continuous measurement of VPHP concentration inside the isolator.

The “hot” response is involved in increasing the VPHP concentration; it takes advantage of specific designed system able to release minimal amount of H2O2 aerosol. VPHP-loaded air is then directly injected within the isolator’s chamber, thus increasing the VPHP level. On the other side, the lowering of VPHP levels is based on the “cold” feedback, consisting UV-C lamps; the 240 nm in wavelength electromagnetic emission catalyses the H2O2 radiolysis, inducing its breakage into H2O and O2.

The system can work in two different ways: in the first one, called static modality, the set VPHP concentration can be stably maintained in time for hours and days. Moreover. the elastic balance between the “hot” and “cold” responses also allows the dynamic moving across different H2O2 concentrations.

Indeed, through the second one, defined as dynamic mode, it is possible to set the time duration for a sequence of VPHP concentrations; the UL-VPHP system can automatically move toward the next pre-set concentration at the end of each phase and keep that level stable for the desired time.